Edit: I’d planned on posting this blog in a week or so’s time.  However, Philip Kerr, the author of March Violets sadly passed away on 23 March, so I thought it would be a fitting tribute to post this review when I had the opportunity to do so (regrettably this day being April Fool’s Day (as well as Easter Sunday)).

The Munich Cricket Club is nothing of the sort.  Well, it may be, but the MCC I recently frequented is a German bierkeller off London’s Victoria Street.  While it may sound like the start of a spy novel, it’s simply the place where both of my accomplices recommended to me the works of Philip Kerr, specifically the Bernie Gunther series of novels. 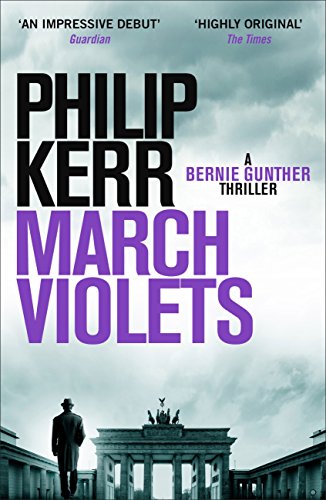 While Kerr, a Scottish author, was unknown to me, he’s clearly a well known author and a highly praised one at that.  The Goodreads entry for his first novel, March Violets, cites Salman Rushdie hailing Kerr as a ‘brilliantly innovative thriller-writer’.

March Violets (Bernie Gunther #1) (1989) was my recommended starting point.  Gunther is an ex-cop turned private detective/gumshoe.  Think Bogie, Big Sleep, Berlin: it’s a great premise.  Gunther has been hired by one of the city’s wealthiest industrialists to find a diamond necklace taken during the murder of his daughter and son-in-law.  His exploits see him rub shoulders with Goering and Himmler, Gestapo agents and local mobsters.  Like any hard-boiled detective, there’s a femme fatale and romantic interest.  This is all set against the backdrop of 1936 Berlin and the staging of the classic Olympic games, which saw Jesse Owens trouncing the competition and the belief in some quarters of Aryan dominance.

Having just finished watching the excellent TV mini-series, Babylon Berlin, March Violets came along at the perfect time.  If you loved Babylon Berlin, then March Violets will be right up your street.  Kerr offers up a convincing portrayal of what it might have felt like to live in 1930’s Berlin, with nationalism, censorship, antisemitism, and institutional thuggery all on the rise.  The plot, like the aforementioned Big Sleep, is somewhat labyrinthine but never dull.  If you’re content to sit back and enjoy the ride with Herr Gunther, and hope that all will become clear in the end, you’ll be rewarded.

As I type this blog, I can tell you that I’m already way into the follow-up to March Violets; The Pale Criminal, the second book in Kerr’s so-called Berlin Trilogy.  I’ll let you know how that ride pans out, so watch this space!