Never Stop II is the 13th studio album released by The Bad Plus and their second album featuring all of their own material; the first being, you guessed it, Never Stop.  The title seems appropriate for another reason.  It’s the first album featuring Orrin Evans in the piano chair, recently vacated by Ethan Iverson, one of the band’s co-founders.  So perhaps, the title reflects the fact that the band continues despite one of the original trio leaving.  And if you suspect that the reference to a piano suggests that we’re not talking a rock band here, you’d be right.  TBP are a jazz trio but not a jazz piano trio in the classic sense.  The bass (Reid Anderson) and drums (Dave King) aren’t just there to support the pianist; it’s a far more democratic affair than that.  TBP are also a little different from the typical jazz trio.  They’re well known for their cover versions, including Nirvana’s Smells like Teen Spirit, Aphex Twin’s Flim, and the Pixies’ Velouria. 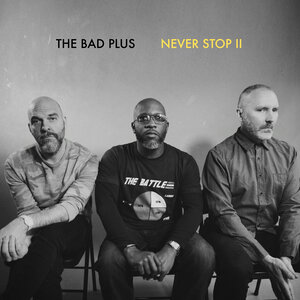 Whether the band plays their own material or cover versions, it’s always clear that it’s TBP.  So I guess there are two questions that need to be answered:  is the album any good; and has the band lost its distinctive sound now that Orrin Evans has arrived?

The answer is yes and no (to coin a Wayne Shorter tune!), respectively.  From the first few seconds you know that this is a Bad Plus album and that remains the case for the rest of the album.  I mentioned earlier that this is a democratic affair and that’s the case with the writing.  Each band member has always contributed tunes and looking back over the band’s output over the last 18 years, I can see that some of my favourites have been penned by bassist Reid Anderson (including Physical Cities, and Seven Minute Mind).  So the loss of Iverson, at least in writing terms, hasn’t dented the band’s capacity to knock out a great tune.

Like Iverson, Evans is no slouch on the piano.  His 2015 album, The Evolution of Oneself was one of my favourites of that year and you can hear from that album alone that he’d have no problem joining TBP.  Evans and Iverson have their own styles but it’s clear that there’s someone else at the keyboard.  Evans has the same sense of anarchic abandon that Iverson possesses but has, it seems to me anyway, a more slippery sense of time, something which I appreciated on his aforementioned album.  The tracks on Soundcloud are three of the ten (if you include the two bonus tracks) and are representative of what you’ll be getting yourself into.

Never Stop II isn’t available for streaming, at least at the moment.  Nevertheless, it’s an investment well worth making, whether or not you know TBP.  I’ve seen the band a couple of times and hope they’ll be making a visit to these shores sometime soon.  They’re a great live band, so, like Pokemon, you should try and catch ‘em if you can.